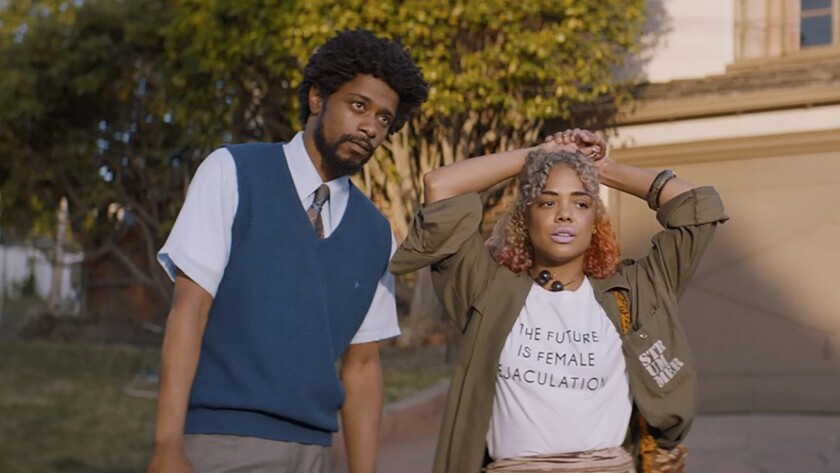 Anderson, Katherine J. "On the Absurdity of Ethical Capitalism." Public Books (May 3, 2019) ["Some critics have categorized Riley’s film as “over-the-top-madness,” deciding that it devolves into the “preposterous” despite its strong start. What it shows us, though, is fundamentally real. The problem, as ever, is whose life gets to count as real, and whose does not. In the same way the Western literary canon defined “realism” as a tidy linear narrative about everyday middle-class white life, and dismissed the stories that didn’t fit that narrative as something else—magical realism (postcolonial literature), Afrofuturism, multiethnic literature, and so on—some have characterized this film as absurd, in the sense of “ridiculously unreasonable” or “extremely silly.” What many others have rightly noted, however, is that Sorry to Bother You should be considered in the tradition of absurdist fiction, which depicts the world as having no rational or orderly relationship to human life, often through satire. That is, though Riley’s film relies on an absurdist aesthetic, its relationship to human life is entirely rational, because it narrates the precarious reality of certain lives as a logical and very real extension of Western capitalist history."]

Archer, Ina Diane and Nicolas Rapold. "Sorry to Bother You." Film Comment Podcast (July 4, 2018) ["'Audiences will enjoy Sorry to Bother You in one go, but the film invites and can stand up to multiple viewings, in much the same way that complex rap lyrics benefit from repeated plays and familiarity gained from memorization,' Ina Diane Archer writes in our July/August issue. “Boots Riley is, by his own definition, a storyteller—a socially conscious, political artist, communist, proud Oaklander, and the beloved front man of The Coup.” Riley’s scabrous satire tracks a telemarketer (Lakeith Stanfield) on the rise in a company engaged in some nefarious labor practices that bring corporate malfeasance into a surreal realm. For our latest episode of The Film Comment Podcast, Archer joined me in a discussion of the feature and the many layers she unpacks in her essay."]

Cummings, Janae and Jon Vickers. "Boots Riley Interview." Profiles (December 23, 2018) ["Mobilizer, instigator, and artist Boots Riley is a prolific poet, singer, songwriter, producer, humorist, and screenwriter. He is a director of films, music videos, and television. He is also a community organizer and public speaker who weaves his social activism and engagement into all of his creative work. Never afraid to speak his mind, or even to challenge his heroes, Boots Riley found politics and activism at the age of fourteen. He is heavily involved in the Occupy Oakland movement, and is one of the leaders of the activist group, The Young Comrades. His directorial debut, Sorry to Bother You, premiered at the Sundance Film Festival in early 2018, and opened in theaters nationwide in July. Boots Riley has also been recording hip-hop and funk music for over 25 years as the songwriter and lead singer of the bands The Coup, and Street Sweeper Social Club. He is also the author of the critically-acclaimed collection of his writings and lyrics, called Tell Homeland Security-We Are the Bomb."]

Goldberg, Michelle. "Pop Culture Gets Radical: Sorry to Bother You and Dietland offer something we need at this moment." The New York Times (July 27, 2018)

Gray, Briahna. "You Say You Want a Revolution? The Anti-Capitalist Film Sorry to Bother You Shows the Way." The Intercept (July 25, 2018)

Koski, Genevieve, et al. "Sorry to Bother You / Putney Swope (1969), Pt. 1" The Next Picture Show #138 (July 24, 2018) ["Rapper-director Boots Riley has said he hadn’t seen Robert Downey Sr.’s 1969 satirical comedy Putney Swope when he made the buzzy new Sorry to Bother Your, but the films share so much on both a surface level (white men providing the literal voices of black characters) and deeper thematic ones (concerns about capitalism, race, and what it might take to burn down an unjust system) that we had to put them in conversation with each other. In this half, we try to make sense of the fascinating mess that is Putney Swope, considering how it works as both satire and comedy, and whether Downey’s choice to overdub his black title character’s voice with his own is an asset or a liability."]
---. " Sorry To Bother You / Putney Swope (1969), Pt. 2" The Next Picture Show #139 (July 31, 2018) ["As with Robert Downey Sr.’s 1969 satirical oddity Putney Swope, there’s a lot going on in Boots Riley’s new Sorry to Bother You, which takes a similar anything-goes approach to the intersection of race and capitalism. In the second part of our “white voice” double feature, we dig into the anti-capitalist philosophy that unites Riley’s work and keeps Sorry to Bother You on the rails, then we look at how the two films compare in their views of race and capitalism, and their use of satire and surrealism."]
Mooney, Shannon. "Sticking to the Script: Constructions of Sonic Whiteness in Get Out and Sorry to Bother You." Supernatural Studies 7.2 (131-154) ["This article places Jordan Peele’s Get Out (2017) into conversation with Boots Riley’s Sorry to Bother You (2018) in order to explore how both films represent whiteness as a penetrative sonic force that can be both heard and recognized. I explore how these two films challenge the popular notion that whiteness, unlike Blackness, is an empty and neutral signifier; instead, these films present whiteness as a racial category that possesses distinct sonic registers. Through their engagements with neoslavery, minstrelsy, and racial passing, these films parody the ways that Blackness has become socially and culturally constructed as “sounding” a certain way, and instead depict whiteness as something that can be aurally recognized and imitated. Through probing at their constructions of sonic whiteness, both Get Out and Sorry to Bother You problematize how popular audiences have been trained to hear (as well as see) race and respond to a longer history of the racialization of sound."]

Phillips, Maya. "Sorry to Bother You and the New Black Surrealism." Slate (July 18, 2018) ["Like Get Out and Atlanta, Boots Riley’s gonzo satire realizes the best way to depict black people’s reality is to depart from it."]

Questlove and Boots Riley. "Sorry to Bother You." The Film Comment Podcast (July 18, 2018) ["Boots Riley, director of the mind-altering new film Sorry to Bother You, and special guest Questlove at the Film Society of Lincoln Center. “All art is political,” said Riley, who detailed the genesis of the movie’s surreal Marxist story of a African-American telemarketer, and traded stories with Questlove about the nitty-gritty of the creative process."]

Riley, Boots. "Boots Riley on His Anti-Capitalist Film Sorry to Bother You, the Power of Strikes & Class Struggle." Democracy Now (September 3, 2018) ["In a Labor Day special, we air an extended conversation with Boots Riley, writer and director of “Sorry to Bother You,” his new film about an evil telemarketing company, a corporation making millions off of slave labor, and one Oakland man at the center of it all who discovers a secret that threatens all of humankind. His dystopian social satire is being hailed as one of the best movies of the summer. Riley is a poet, rapper, songwriter, producer, screenwriter, humorist, political organizer, community activist, lecturer and public speaker—best known as the lead vocalist of The Coup and Street Sweeper Social Club."]

---. "On Sorry to Bother You and Communism." The Dig (August 9, 2018) ["Sorry to Bother You is a hilarious film about the dead serious shitiness of life under neoliberalism's flexibilized and precarious labor regime, a system teetering upon a thin line between free labor exploitation and a form of expropriation reminiscent of full-on slave labor—all at the mercy of the thinly-veiled barbarity of Palo Alto-style techno-utopianism. It's about how capitalist society divides and conquers friends and family to claim not only our obedience but also our very souls, and about how the task of left organizing is to see through that game and fight together. Dan's guest today is Boots Riley, who wrote and directed the film and also fronts the left-wing hip hop group The Coup."]

Sweedler, Milo. "Art, activism, sales calls, and slave labor: Dialectics in Sorry to Bother You." Jump Cut #61 (Fall 2022) ["Boots Riley’s debut film, Sorry to Bother You (2018), is one of the great anti-capitalist films of the early twenty-first century. Although Riley characterizes the movie as “an absurdist dark comedy with magical realism and science fiction,” which it is, the film also provides one of the most clear-sighted accounts of grassroots class struggle to appear in mainstream North American narrative cinema in decades (“Beautiful Clutter”). As witty, playful, and delightfully quirky as it is, Riley’s tale of an ethically compromised telemarketer, his artist-activist girlfriend, and the labor organizer that unionizes their workplace sheds brilliant light on the class struggle today. I analyze here two different kinds of dialectics that Riley uses in telling his story of class conflict in an alternate present-day Oakland, California. One the one hand, a narrative technique used repeatedly in the film is dialectical in the Ancient Greek sense of staging a debate between interlocutors holding different points of view. On the other hand, numerous scenes in the film set up a contradiction that the movie momentarily resolves, often in unexpected ways, before introducing a new element that complicates the resolved contradiction. If, as Karl Marx argued more than 150 years ago, “What constitutes dialectical movement is the coexistence of two contradictory sides, their conflict and their fusion,” Sorry to Bother You is dialectical in this way, too (Poverty of Philosophy 108). This article examines how these two dialectics shape Riley’s class-conscious film."]

Tiffany, Kaitlyn. "Sorry to Bother You gets everything right about the horrors of viral fame." The Verge (July 24, 2018) ["It’s a radical statement about capitalism and the internet long before the big twists hit."]