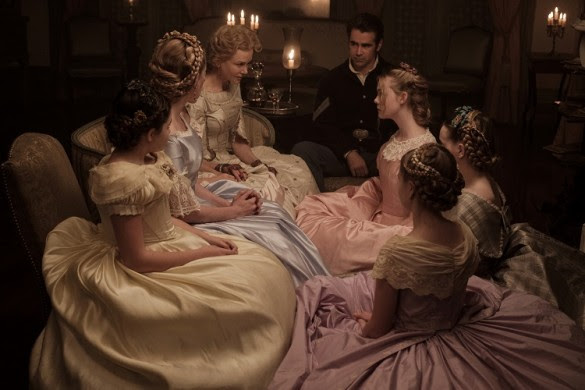 I really enjoyed Sofia Coppola’s THE BEGUILED (even if it's not my favorite of her films: that would be THE BLING RING)—and would love to hear what others thought of it. A few observations: (1) The best thing about the whole experience is the very radical and productive contrast with the 1971 original (by Don Siegel, with Clint Eastwood). Each film would be diminished without the other. While the Siegel is pulpy, feverish, expressionist, the Coppola is sly, calm, detailed, precisely controlled; (3) J. Hoberman is right in calling the Coppola a “dark comedy of manners”—although he’s wrong in claiming that the Siegel original is unqualifiedly misogynistic (it’s a more ambiguous and complicated film than that); (4) The host of detail that Coppola carefully builds up in order to signify refinement, containment, and repression (from the high-necked dresses to the French and music lessons, penmanship, embroidery, and all the period décor—so much of this rendered in close-ups of surfaces) is wonderful—and too easily overlooked/underappreciated; (5) The “whitewashing” of the new film (by omitting the fiery character of Hallie, the slave) is unfortunate, disappointing, unforgivable—but I’m not ready to write off/dismiss the entire film because of it…. -- Girish Shambu (Posted on Facebook: July 10, 2017)

The Beguiled Critics Round Up (Ongoing Archive)

Bunch, Sonny. "Of course Sofia Coppola’s The Beguiled differs from the original. That’s what makes it great." The Washington Post (July 6, 2017)

Dargis, Manohla and A.O. Scott. "One Nation Under a Movie Theater? It's a Myth." The New York Times (September 7, 2017)  ["Hollywood wants us to think that its films are for everyone, but our critics say that was never true. Still, they see a way forward."]


Madison, Ira. "Sofia Coppola’s The Beguiled Controversy and What We Expect From White Directors." The Daily Beast (June 24, 2017)

Moore, Booth. The Story Behind the Sweet (and Sinister) Costumes in Sofia Coppola's The Beguiled." The Hollywood Reporter (June 15, 2017)


Rao, Sonia. "Sofia Coppola’s The Beguiled criticized for leaving out a slave narrative from the Confederate South." The Washington Post (June 22, 2017)

Rickey, Carrie. "Sofia Coppola’s The Beguiled: Why Some Critics Brought Out the Knives." IndieWire (July 14, 2017)

Sims, David. "The Beguiled is a Steamy but Restrained Thriller." The Atlantic (June 23, 2017)
"Sofia Coppola." Director's Club (August 20, 2017) ["In this episode, the Director's Club looks at the films of Sofia Coppola (a.k.a., "The Good One"), whose movies had a dreamlike feeling of melancholy isolation, level of visual composition, and focus on young womanhood that was evident from the start of her career. We're joined in our journey through her film work (that takes us from L.A. to Tokyo to Versailles to the Civil War South) by Rebecca Martin, an ultra-promoter of film appreciation in the Chicago area and host of Now Playing Network's "Fresh Perspective.""]