Richard L. Rubenstein: The Cunning of History: The Holocaust and the American Future 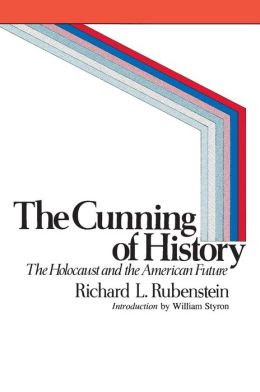 Rubenstein, Richard L. The Cunning of History: The Holocaust and the American Future. NY: Harper Colophon, 1978.

{MB—pages 12-21 examine the judicial process that led to the development of the death camps and mass extermination. Important in this legalistic development was the designation of “apatrides or stateless persons” (12) at the end of WW1. These were people who had been denied any official standing in the nation and thus could be prosecuted or jailed at any time for no reason at all. Also the process of denaturalization or denationalization was increasingly used during and after the 1920s to deal with unwanted minority groups within the European states. This was an effective stripping of any rights whatsoever. Concentration camps first appeared across Europe to deal with apatrides (or refugees).}

The concentration camps for the apatrides served much the same purpose as did the original Nazi camps in 1933 and 1934. In the popular mind, the first Nazi camps conjure up images of wild sadism by brutal brown-shirted storm troopers. The images are, of course, well deserved, but they tend to hinder precise understanding of the development of the camps as a legal and political institution. (Rubenstein, 15)

Initially, the concentration camps were established to accommodate detainees who had been placed under “protective custody” (Schützhaft) by the Nazi regime. Those arrested were whom the regime wished to detain although there were no clear legal justification for so doing. Almost all of the original detainees were German communists, not Jews. Had the Nazis’ political prisoners been brought before a German court in the first year or two of Hitler’ regime, the judiciary would have been compelled to dismiss the case. This was not because the German judiciary was anti-Nazi, but because it was bureaucratic in structure. In the early stages of the Nazi regime, there was no formula in law to cover all the political prisoners the Nazis wanted to arrest. This problem was solved by holding them under “protective custody” and setting up camps outside of the regular prison system to receive them. Incidentally, the American government did something very similar when it interned Japanese-American citizens during World War II. They had committed no crime. No court would have convicted them. Prison was not the place to detain them. Happily, as bad as were the American concentration camps, they were infinitely better than the German counterparts. (15-16)

One of the least helpful ways of understanding the Holocaust is to regard the destruction process as the work of a small group of irresponsible criminals who were atypical of normal statesmen and who somehow gained control of the German people, forcing them by terror and the deliberate stimulation of religious and ethnic hatred to pursue a barbaric and retrograde policy that was thoroughly at odds with the great traditions of Western civilization. On the contrary, we are more likely to understand the Holocaust if we regard it as the expression of some of the most profound tendencies of Western civilization in the twentieth century. (Rubenstein, 21)

In order to understand more fully the connection between bureaucracy and mass death, it will be necessary to return to the apatrides. They were the first modern Europeans who had become politically and legally superfluous and for whom the most “rational” way of dealing with them was ultimately murder. A majority of the apatrides had lost their political status by a process of bureaucratic definition, denationalization. (Rubenstein, 31)

Men without political acts are superfluous men. They have lost all right to life and human dignity. Political rights are neither God-given, autonomous nor self-validating. The Germans understood that no person has any rights unless they are guaranteed by an organized community with the power to defend such rights. They were perfectly consistent in demanding that the deportees be made stateless before being transported to the camps. They also understood that by exterminating stateless men and women, they violated no law because such people were covered by no law. Even those who were committed by religious faith to belief in natural law, such as the hierarchy of the Roman Catholic church, did not see fit to challenge the Nazi actions publicly at the time. (Rubenstein, 33)
Posted by Michael at 1:20 PM