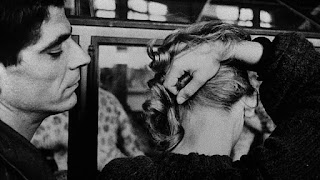 Denali Outside (June 9, 2015) ["There's no easy way to say goodbye to a friend, especially when they've supported you through your darkest times. Denali is the story of photographer Ben Moon and his beloved dog, Denali. A collaboration between director Ben Knight, producer Ben Moon and cinematographer Skip Armstrong, Denali celebrates the human-dog bond and illuminates the incredible resilience we can conjure up with the help of friends."]

House of Cards by Radiohead (Directed by James Frost, 2007: 4 mins and 32 seconds) ["These ephemeral bursts emanate from the 2008 music video for Radiohead’s “House of Cards” by director James Frost and technology director Aaron Koblin. The ethereal video holds a special place in music video history as the first to be created using high-tech scanning and laser systems to capture and then visualize chunks of 3-D information. Scanners, including the Lidar scanner used by Frost and Koblin, work by sending light pulses across a surface area and then measuring the time it takes for the light to return to the scanner. Each pulse of light that is emitted and then returned is placed within a representation known as a point cloud. Together, the points create a trace of the surface that they have measured. Frost and Koblin worked with scientists and technology experts from UCLA to make the video, inaugurating, whether they intended to or not, a shift in cinematic practice. The video’s point-cloud aesthetic eschews human perception and photographic representation as its foundation, turning instead to processes of scanning, tracing, and layering that relinquish the human body as their measure, and that forgo light as their foundation." - source Holly Willis (August 13, 2017)]

"Jared Leto Stars in a New Prequel to Blade Runner 2049: Watch It Free Online." Open Culture (August 31, 2017)
Junior [Julia Ducournau's 2011 first short film 'Junior' is impressive and demonstrates the vision/skill that would be put to use in her first two features 'Raw' (2016) and Titane (2021): "Justine, who goes by Junior, is a 13-year-old tomboy with pimples and a unique sense of humor. After unexpectedly contracting a stomach virus, her body becomes home to a bizarre metamorphosis."]

Knights of Cydonia by Muse (Directed by Joseph Kohn, 2006: 6 mins and 5 seconds)

The Less I Know the Better by Tame Impala (Canada collective, 2015)

Until the Quiet Comes by Flying Lotus (Kahlil Joseph, 2013: 4 mins)