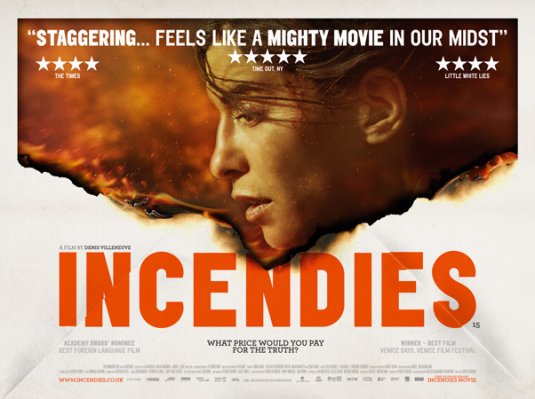 Gulgoz, Selun. "The Politics of Art: Middle Eastern Women in Fiction and Film." The Millions (January 5, 2012)

Laczkowski, Jim, et al. "Denis Villeneuve." The Director's Club #140 (December 17, 2017) ["Now Playing Network Master of Ceremonies (and Director's Club founder) Jim Laczkowski joins us for this episode which has us looking at the films of French Canadian filmmaker Denis Villeneuve! With Jim's help, we look at how Villeneuve brings his unique combination of thoughtfulness, pathos, family focus, and strangeness to dramas, genre thrillers, and films across the sci-fi spectrum. Includes lots of spiders and one talking fish."]

Said, Edward W. "Invention, Memory, and Place." Cultural Studies: From Theory to Action. Malden, MA: Blackwell, 2005: 256-269. [In BCTC Library and professor has a copy]
StudioBinder. "Denis Villeneuve & His Cinema of Ambiguity — Directing Styles Explained." (Posted on Youtube: April 6, 2020) ["Denis Villeneuve movies are made to confuse you. At every opportunity — in the story, in the cinematography, editing, and music, Villeneuve wants to keep you guessing. Watching Denis Villeneuve movies is to be placed in an environment of uncertainty. And that’s what makes them so interesting. In films like Enemy, Prisoners, Polytechnique, Blade Runner 2049, and Arrival, Villeneuve consistently creates awe and wonder with images and sounds we’ve never seen before. In Enemy, Adam (Jake Gyllenhaal) must confront the possibility that he is more than a single person. In Sicario, Kate (Emily Blunt) is pushed into the world of drug cartels by a tight-lipped company man (Josh Brolin) and a near-silent assassin (Benicio Del Toro). In Prisoners, Keller (Hugh Jackman) ventures into murky moral territory to find his kidnapped daughter. In Arrival, Louise (Amy Adams) and Ian (Jeremy Renner) are tasked with bridging the communication gap between beings from another dimension. In all these movies, the characters find themselves in new worlds without answers. In this video, we’ve cracked the code on Villeneuve’s love of ambiguity and we explain how his directing style works across 7 areas of focus including sound, color, production design, and more. Villeneuve creates movies that can be enigmatic but there’s no denying that he is a film artist in complete control of his medium. If you’re studying directing, cinematography, editing, or pursuing ANY career in filmmaking, there are a ton of lessons to be learned from Denis Villeneuve. This is the ultimate breakdown of Denis Villeneuve’s directing style."]