Glenn Heath Jr. on Abel Ferrara's The Addiction (1995)
Not Coming to a Theater Near You 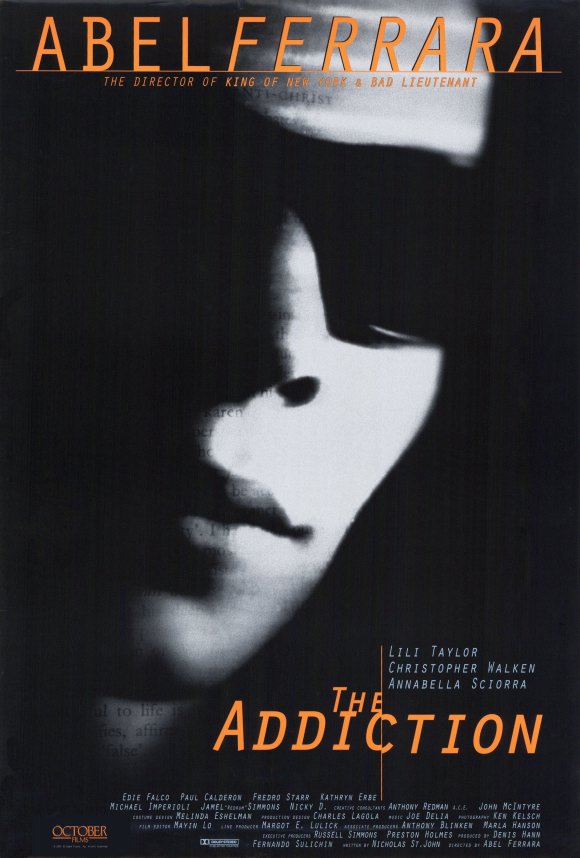 It’s all theory and philosophy until someone gets bit. Abel Ferrara’s art/vampire film The Addiction, a dense and moody examination of fear and self-loathing in 1990s New York City, takes this credo to insane heights. In the beginning, words and ideas are modes of deflection used by characters living in an academic world where hypothetical thought rules. But their wake-up call sleeks through the night, appearing suddenly and without reproach, brutally executing a primal reckoning of faith. From here, a new language emerges written in jet-black blood, caked on the lips of sirens and streaming down the contours of swan-like necks. Here, the crisp texture of film and photographic images is crucial for Ferrara. He sees the jarringly blunt stylization of death and trauma as the only way to reveal highbrow banter as dangerous contradiction, doing so within a genre primed for social critique. But is the horror film itself part of the problem? It all starts simply enough with a nighttime stroll and a sudden proposition of fate.

“Tell me to leave you alone,” demands a stunningly calm vampire seductress to a shocked grad student in a dank New York City alley crisscrossed by sharp, bleeding shadows. What a dare! These haunting words are uttered before each brazen attack in The Addiction. It’s as if the various supernatural beings walking the dark streets must defy their prey to stand up for survival before jumping on a single bit of hesitation to justify the impending blood lust. But looking evil in the eye and failing to react is just one of the many philosophical and moral conundrums recycling throughout Ferrara’s black and white masterpiece about dependency, fear, and political outrage. In fact, there are so many competing ideological threads in The Addiction that the very act of verbal expression becomes a form of sadism.

Kathleen Conklin, the aforementioned tough-minded grad student played by Lili Taylor who gets attacked by a sleek vampire named Casanova in the opening moments of Ferrara’s film, initially defines her professional and personal life by historical revisionism. War crimes are her object of study, and she spends the film’s first moment studying graphic pictures documenting the Mai Lai Massacre. Kathleen views these images with cold detachment, listening intently to the droll voiceover of a lecturer: “The conscience of an outraged society was temporarily satisfied,” he dramatically muses, referencing the American public’s faux-appeasement after obtaining national justice against the guilty soldiers. But college life is just a façade, and Ferrara has big thematic plans for Kathleen. After being attacked, the deep bite marks on her neck and the blood streaming down her face, often framed within smooth, nearly slow motion dolly shots, begin a slow transition from theoretical dependency to literal acts of horror and extreme physical addiction.

To Read the Rest of the Response

Posted by Michael Benton at 2:08 PM