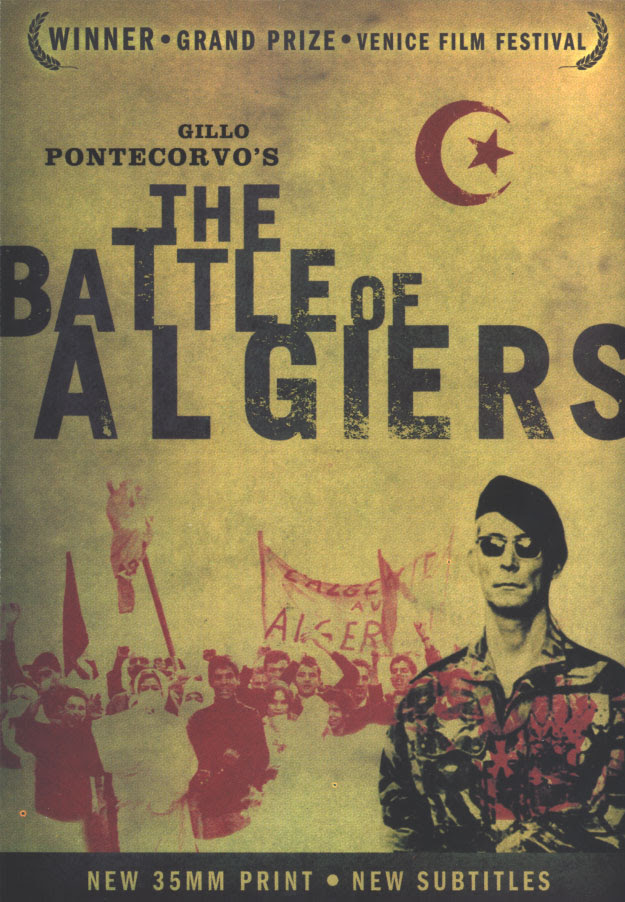 Freund, Charles Paul. "The Pentagon's Film Festival: A Primer for The Battle of Algiers." Slate (August 27, 2003)

Gordon, Rebecca. "Torture, Ethically Speaking." Against the Grain (March 30, 2016) ["Is torture ever morally permissible? For what purposes does the U.S. government practice torture? And what should we make of the oft-repeated ticking time bomb scenario? Rebecca Gordon contends that examining torture through the lens of virtue ethics helps us understand what torture does in relation to its targets, its practitioners, and society at large."]

Hudis, Peter. "Frantz Fanon." Against the Grain (March 28, 2016) ["The revolutionary and psychiatrist Franz Fanon was arguably the greatest philosopher of anti-colonialism.  At a time when activists are turning the spotlight on racial oppression, he's never been more relevant. Peter Hudis discusses Fanon's writings on nationalism, race, and humanism. He also explores the controversial question of violence."]

Johnson, Sheila K. "The Battle of Algiers and Its Lessons." Common Dreams (September 7, 2003)

Koski, Genevieve, et al. "Detroit / Battle of Algiers, Part 1." The Next Picture Show #90 (August 22, 2017) ["Kathryn Bigelow’s intense, controversial new docu-drama DETROIT owes no small debt to Gillo Pontecorvo’s intense, controversial 1966 film THE BATTLE OF ALGIERS, which covers another volatile historical moment with a potent mixture of newsreel-style realism and expressionistic fervor. In this half of our comparison of the two films, we discuss what makes BATTLE OF ALGIERS such an unsettling and resonant film, debate what point it’s making around the issues of terrorism and torture, and, somehow, find the echoes of Pontecorvo’s film in James Cameron’s AVATAR."]

---. "Detroit / The Battle of Algiers, Part 2." The Next Picture Show #91 (August 24, 2017) ["Like Gillo Pontecorvo’s BATTLE OF ALGIERS, Kathryn Bigalow’s new film DETROIT expresses a strong point of view on racial injustice through a careful recreation of a real historical event — and also like BATTLE OF ALGIERS, it’s stirred up some controversy surrounding its docu-journalistic approach. We unpack that controversy, and DETROIT more generally, before diving into how the two films compare in their visceral style, their portrayals of law enforcement, their use of female characters, and more."]

Memmi, Albert. The Colonizer and the Colonized. Souvenir Press Ltd., 1974.