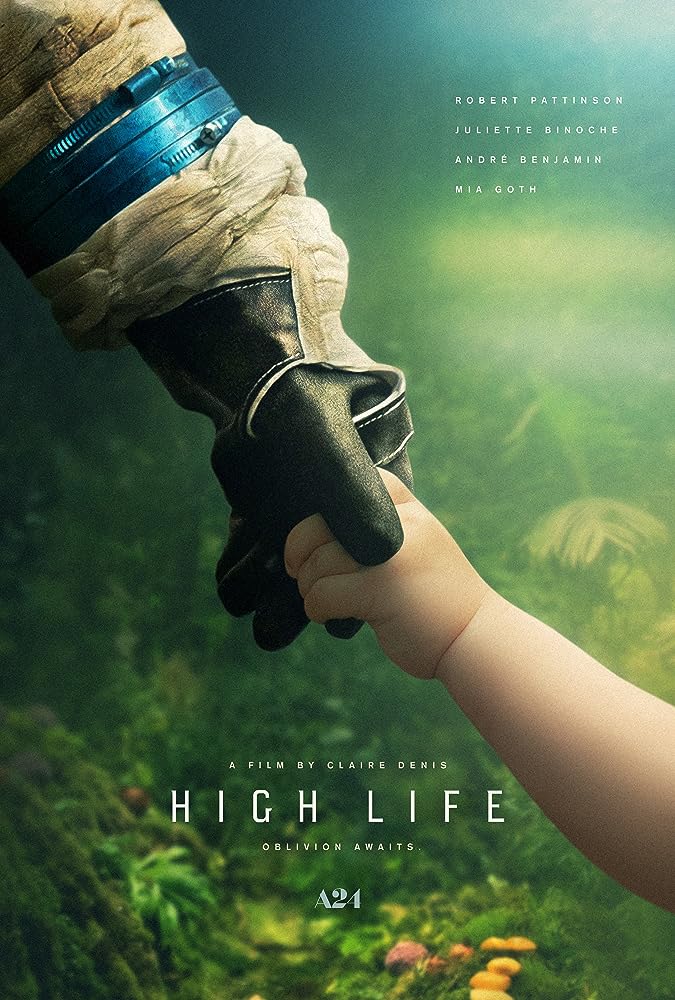 A mesmerizing but elusive study of primal emotions under the pretense of cerebral science-fiction, Claire Denis’ High Life is, unmistakably, a significant film. It’s the most expensive and, on the surface, commercially viable film ever made by the French auteur, who is often cited as one of the greatest living directors. But rather than embrace the conventions of her chosen genre here, she excises any need for the traditional film grammar or storytelling put forth in the guidebook for making a so-called successful film. It’s no more a pure science-fictioner than her 2001 effort Trouble Every Day was your run-of-the-mill cannibal movie. Denis somehow assembles a motion picture that has the production value and cast of a Hollywood feature, yet she does not betray her penchant for opaque filmmaking, preoccupations with the body, and entrenched symbolism contained within a nebulous framework. High Life is headlined by Robert Pattinson and Juliette Binoche, two of today’s best performers, who set out to explore black holes in deep space; however, the machinations of the plot may exist entirely as a pretext for whatever else is on Denis’ mind. It’s the sort of film that has the potential to be everything to everyone. And it’s no stretch to claim that it’s about life, death, everything in-between, and whatever awaits in infinity. Above all, it’s experiential viewing, where your response depends less on a clear breadcrumb trail left by Denis for you to follow, and more on something that taps into the subconscious. -- Brian Eggert, High Life (April 5, 2019)

Denis, Claire. "High Life." The Treatment (April 26, 2019) ["Despite his young age, French director Claire Denis knew after meeting actor Robert Pattinson she'd found the lead for her film. "High Life" tells the eerie story of a man and his baby trapped among the last survivors of a deep space mission. For Denis, this film was best represented as an examination of humanity through the lens of youth. Today on The Treatment, Denis discusses her need to juxtapose life against death in her new film and explains the mark that growing up in French colonized West Africa made on her life and film making."]

Denis, Claire and Robert Pattison. "High Life." Film Comment Podcast (April 17, 2019) ["For our latest Film Comment Free Talk, Claire Denis and Robert Pattinson joined FC Editor-in-Chief Nicolas Rapold to discuss their singular new High Life. The film, in theaters now, features a cast including Pattinson and Juliette Binoche as a group of death row inmates set adrift in space as part of an intergalactic science experiment. In his feature on the film, Nick Pinkerton writes that, “while High Life is the biggest and most expensive movie that Denis has ever made, it gives little indication of its scale having been bartered for at the sacrifice of freedom—or with the stymieing of the go-with-the-gut intuition that has produced a sui generis body of work, created with enormous craft but a total disdain for the rules of the ‘well-made’ film, elliptical in approach and full of jarring tonal shifts.” In this conversation, the filmmaker and her lead actor discuss working together to bring High Life to the screen, Denis’s remarkable eye for physicality, encountering the taboo, considerations of genre, and much more."]

---. "Talk High Life at NYFF 56." The Close-Up #224 (April 25, 2019) ["Claire Denis’s High Life was one of the most buzzed-about movies at last year’s New York Film Festival. Starring Robert Pattinson and Juliette Binoche, the film is set aboard a spacecraft piloted by death row prisoners on a decades-long suicide mission to enter and harness the power of a black hole."]


Kaufman, Sophie Monks. "High Life." Little White Lies #79 (March/April 2019) ["I’ve seen this film three times. Why see a film three times? The lure of intense mystery that beguiles you into trying to solve it again and again; the transference of an intoxication that makes you feel physically different afterwards. It sounds hyperbolic to describe art as having such power, but surely the reason we care about art is a belief that such power exists. High Life is too layered, too ambiguous, too potent to be about any one thing. My interpretation is unlikely to be the same as other interpretations. All I can say is that it’s a pleasure to have my reviewing faculties blown and my psyche splintered by this master filmmaker. The art we love works to expose our values, our tastes. My taste for Claire Denis leaves me feeling totally exposed, like a baby burbling to a benign authority while adult emotions twist in the darkness of the universe."]

Pinkerton, Nick, Nicolas Rapold and Madeline Whittle. "High Life and Beyond." Film Comment Podcast (March 20, 2019) ["With a cast featuring Film Comment cover subject Robert Pattinson and Juliette Binoche as members of a group of death-row convicts trapped on an experimental, interstellar journey, High Life tells a story of intimacy, isolation, and taboo. Though it touches on themes of family and group identity that may be familiar to fans of Denis, the film’s setting and nods to science fiction make it a both a continuation and a complication of many of the ideas, feelings, and sensations that she’s explored before. For the occasion, Film Comment Editor-in-Chief Nicolas Rapold welcomed FC contributing writer Nick Pinkerton (author of the March-April issue’s High Life cover story) and Madeline Whittle of the Film Society of Lincoln Center, to discuss both High Life and one other Denis film chosen by each guest."]

Preziosi, Patrick. "“Why Don’t You Ever Take Me In Your Arms”: Claire Denis’ Cinema of Intimacy." Photogénie (November 16, 2018)
Walton, Saige. "Cinema and Sensation: French Film and the Art of Transgression by Martine Beugnet." Senses of Cinema #50 (April 2009) ["Those familiar with French director Claire Denis will be aware of the exquisite sensuality of her cinema. Whether coming together with another body in the world through the shared space and flesh of desire, or being driven apart from others by personal and sociopolitical circumstance, bodies – their gestures, bites and kisses, alternately languid or energetic movements, postures, habits and rituals – are the very “stuff” and substance of the film experience here. Given her privileging of the senses and her amenability to, as well as considered dialogue with, philosophers of the body, Denis is at the forefront of a number of contemporary directors (by no means exclusive to France, if we consider the work of figures such as Hou Hsiao-hsien, David Lynch or Wong Kar-Wai) who are generating much interest from sensually alert film scholars. Adrian Martin, for instance, identifies “the bedrock of Denis’ cinema [as] the flesh”, while Elena del Río comments that the “film body” of the cinema itself becomes a “sensation producing machine” in Denis, as if each film were “sending ripples of affect and thought across a diversity of its movements”, independent of the body of the viewer. The arresting materiality that infuses Denis forces us to look anew at sensory encounters with the cinema."]