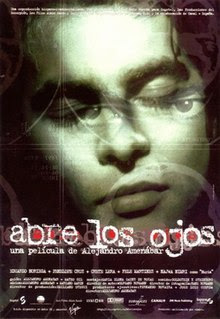 My aim here is to examine the arguments of French philosopher René Descartes (1596-1650) through the contemporary viewfinder of Alejandro Amenábar’s Abre los Ojos (1997). The intention, however, is not to use the film as a mere vehicle for conveying Descartes’ thought, but rather to consider whether the particular context that Amenábar provides, and the nature of film itself, can enhance our understanding and and provide fresh insight into the issues that Descartes raises.

Descartes is writing at a time of scientific revolution and upheaval – many doctrines which have hitherto been accepted as most certain have been overturned and, as such, he is struck by the instability and unreliability of scientific ‘knowledge’. In his First Meditation, Descartes aims to sweep away all of his previously held opinions and start afresh. Descartes’ ‘method of doubt’ entails that if anything can be doubted, however slightly, then we are to treat it as if it is manifestly false and reject it outright. It is not, however, necessary that we subject each and every one of our opinions to this hyperbolic (exaggerated) doubt, as this would be a Sisyphean task. Rather, Descartes aims to test the ‘foundations’ of what we claim to know – ‘as the removal from below of the foundation necessarily involves the downfall of the whole edifice’.

Descartes’ claim is that one of these foundations is the senses – that is to say, if we can cast any doubt whatsoever on the reliability of the senses then we should reject as false whatever we learn from them:

All that I have, up to this moment, accepted as possessed of the highest truth and certainty, I received either from or through the senses. I observed, however, that these sometimes misled us; and it is the part of prudence not to place absolute confidence in that by which we have even once been deceived.

After briefly considering optical illusions and madness, Descartes goes on to provide one of the most famous arguments in philosophy: the dream hypothesis. What Descartes hopes to establish via this argument is that, given any particular experience, we can never know that that experience is not a dream.