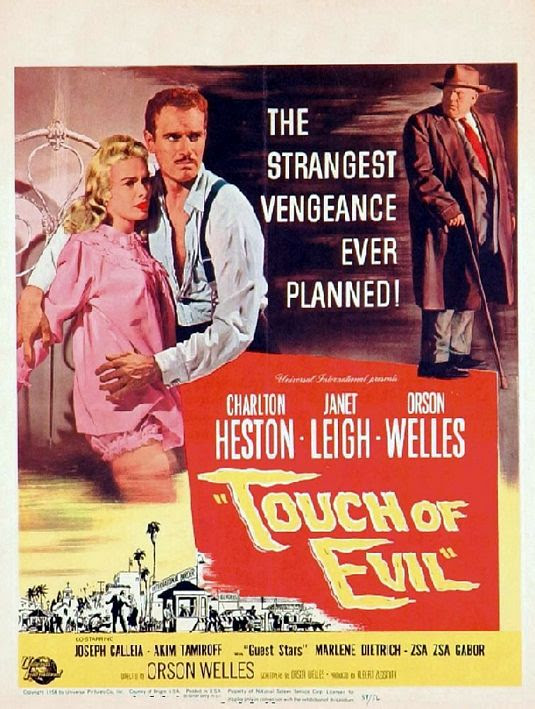 Although much has been written about the expressive visual language in the films directed by Orson Welles, comparatively little attention has been paid to their sensual auditory landscapes. Critical analysis of Touch of Evil (1958), a film Paul Schrader famously described as the "epitaph of film noir" (Schrader 1972: 61), has tended to be no different in perpetuating this apparent domination of the image. In this article, I will identify Welles' auditory strategies through a discussion of their formal characteristics and then examine how they elucidate the film's narrative and thematic concerns.

When film sound is discussed, it is most often referred to in terms of what it adds to the image, so my comments in this essay regarding the film's visual qualities will be purposefully limited in order to counteract this tendency in film scholarship. Aside from innovative and detailed work by Rick Altman and Michel Chion,1 the vocabulary of sound theory is not as established as the accepted visual terminology of cinematic discourse. This perhaps suggests that our auditory imaginations are not as well developed with regard to filmic technique. Chion argues that one of the reasons for this is that sound has no audio unit comparable to the specifically cinematic unit of the visual "shot." Instead, the listener has to break a film text down into elements of everyday experience such as verbal sentences, musical themes, and individual noises (Chion 1994: 45). Therefore sound will remain perceived as secondary to the image even though it is audio, to a considerable degree, which gives the cinema's large flat screen its three-dimensionality by way of the illusory audiovisual contract with the spectator.2

Touch of Evil is a heated crime noir story of police corruption and murder set against the seedy backdrop of a fictitious Mexican American border town called Los Robles. After a car bomb kills an influential local businessman and his young girlfriend, newlyweds Mike (a Mexican narcotics enforcement official played by Charlton Heston) and Susan Vargas (Janet Leigh) become embroiled in a furious chain of events that leads Mike into a direct confrontation with the town's morally and physically grotesque police captain, Hank Quinlan (Orson Welles).

The main obstacle in building a consistent discourse on Touch of Evil is that there are three versions presently available; the original theatrical release, the "preview version" discovered deep inside the Universal archives in 1975, and the 1998 "restored cut" produced by Rick Schmidlin and re-edited by Walter Murch following notes made by Welles in his now legendary 58-page memo. The document was written after Universal had dismissed Welles from post-production but was contractually obliged to show the director a studio-approved assembly of his footage — for a single screening. The version I have chosen to focus on is the 1998 re-edit because, though not a complete director's cut, it is the closest to Welles' intentions for the film.3 For this important restoration, Murch was able to obtain an original monaural optical print that had been created from a magnetic mix consisting of three separate tracks: music, dialogue, and sound effects (Murch 1998: 83-102). This simple component breakdown will inform the structure of my essay.

One of Welles' primary audio strategies in Touch of Evil is the use of acousmatic source music to create a sense of depth and perspective to articulate the fictional border town of Los Robles. After the brief overture accompanying the Universal logo, Welles makes extensive use of diegetic music (all compositions by Henry Mancini) from local bars, nightclubs, and car stereos as the camera weaves through the border town, switching perspective from the unidentified bomber onto the car as it steadily moves through the town, finally settling on Mike and Susan Vargas before the explosion.4 As Welles described in his memo, "Underscoring... is to be most sparingly used, and should never give a busy, elaborate, orchestrated effect. What we want is musical color rather than movement; sustained washes of sound rather than... melodramatic or operatic scoring" (Tully 1999). This multileveled mix of rock and roll and Latino dance numbers effectively comes to replace conventional "thriller" underscoring, and it is a full twenty minutes before the first non-diegetic music is used, occurring during a verbal confrontation between Vargas and Quinlan. The harmonics of these culturally distinct musical styles are clashed forcefully together to create a thematic foreshadowing of the divisive role that race will have in the story, whilst at the same time revealing the director's hyper-realist sensibility. Welles' technique — a kind of deep spatial and temporal focus — pursues realism only to exaggerate it and draw attention to itself as a filmic construct.

Welles familiarizes us with the geography of the town largely through source music. Los Robles is presented as a labyrinth, an inter-place where physical and moral borders are erased. There are few conventional transitions; scenes tend to leak into each other. However, the acoustic space is often divided within scenes, the music synchronously creating a sonic partition that is slowly erected as the narrative progresses. The breaking down of physical borders is, throughout the film, used as a metaphor for the moral crumbling of its protagonists. In the final sequence, Vargas and Menzies (Joseph Calleia) are required to lure Quinlan away from Tanya's (Marlene Dietrich) bordello in order to obtain a clean recording of his confession (because Quinlan would "never stand" for the music to be turned off). At the end, we are cut adrift from the music and lost geographically in a field of oil derricks indicating that each character is collapsing into their own moral abyss. The musical compositions gradually become leitmotifs assigned to a particular character or thematic idea. For example, the pianola theme is continuously linked to notions of nostalgia and usually precedes an appearance of Tanya — except when it is played in a modified form in the bar as the scheming Grandi feeds Quinlan shots of bourbon. The theme is reprised for a final time after Quinlan's death; as Tanya walks away into the night, it becomes a shatteringly poignant coronach for lost innocence.

To Read the Rest of the Essay
Posted by Michael Benton at 12:47 PM