Near the beginning of The Dark Knight Rises, we learn that we are rejoining Gotham City’s storyworld eight years after the events shown in The Dark Knight (meaning that roughly twice as much time has elapsed in the world on that side of the screen as in the one on this). At the end of that film, we saw Batman (Christian Bale) vow to Commissioner Gordon (Gary Oldman) that he would take the blame for the murders committed by Harvey Dent (Aaron Eckhart), the city’s one-time ‘White Knight’ politician driven to the dark side by the Joker (Heath Ledger). Here is Batman’s justification for what he proposes:

In a recent feature published on this site, John Bleasdale suggests that superhero movies ‘are almost fundamentally bound to be mendacious and reactionary.’ He cites the conclusion of The Dark Knight as ‘evidence [of] a distrust in society’:

‘In The Dark Knight, Batman conspires with Commissioner Gordon to cover up Harvey Dent’s crime, laying the blame on Batman. Why? Because the people need to be protected from the truth, we are solemnly told in the film’s final moments, via a child. But, again, why?’

One way of answering this question is provided by an intriguing recent book written by Robert B Pippin, a professor of philosophy, entitled Hollywood Westerns and American Myth: The Importance of Howard Hawks and John Ford for Political Philosophy. One of the films that Pippin examines is John Ford’s great Western The Man Who Shot Liberty Valance (1962). In that film, John Wayne’s cowboy character Tom Doniphon shoots dead the murderous dandy Liberty Valance (Lee Marvin), but he lets the world believe that Eastern lawyer Ransom Stoddard (James Stewart) was the man who fired the fatal bullet. Ranse learns the truth shortly after the event but, with a little convincing from Tom, goes along with the story (which becomes a legend), and builds a long and successful political career on the basis of his false reputation as the man who shot Liberty Valance. When, towards the end of the film, Ranse tells the truth to the reporters at the newspaper of the town where the events occurred, the editor decides to consign the notes to the flames. Like Batman, he offers words that suggest, somewhat cryptically, what value there might be in perpetuating an untruth: ‘This is the West, sir. When the legend becomes fact, print the legend.’

Pippin’s interpretation of Liberty Valance is conscious of the fact that in most Westerns (and arguably, all great Westerns), what is at stake is never simply violence, but the meaning of violence - which is rarely simple. More important than the fact of Liberty Valance’s death is the meaning of this fact, which depends crucially on who killed him. By posing as the man who shot Liberty Valance, Ranse appears to synthesise two sets of qualities which are seen as valuable, but which are rarely found together in one person. As Dutton Peabody, Ranse’s most eloquent advocate at a political rally, tells the gathered crowd:

“He is a man who came to us not packing a gun, but carrying instead a bag of law books. Yes! He is a lawyer. And a teacher! The first west of the rosy buttes. But more important! He is a man who has come to be known throughout this territory, in the last few weeks, as a great champion of law and order!”

We see a similar thing going on in relation to Harvey Dent in The Dark Knight when (in a slightly hokey passage) he disarms a man who has managed to smuggle a gun into a criminal trial and barely stops to draw breath before continuing his display of legal brilliance. As Richard Dyer’s foundational work on film stardom demonstrates, the near-‘magical’ synthesis of the contradictory demands of a given culture is one very compelling way of explaining that elusive phenomenon called ‘charisma’.

In The Man Who Shot Liberty Valance, the death of Valance (or perhaps one should say, of Liberty) is shown to pave the way for the establishment of the rule of law and order, creating, eventually, a clean and prosperous town where, to quote another classical Hollywood Western, to which we shall return, a decent woman feels safe walking down the street. Robert Pippin has this to say about why it is crucial that it be believed that Liberty Valance was killed not by tough, self-reliant Westerner Tom Doniphon but Eastern attorney-at-law Ransom Stoddard:

‘A victory over Liberty Valance […] by Tom Doniphon would be just one more episode in a cycle of violence, revenge and intimidation. Valance must be killed by a representative of a new order; his death must mean that. So since Tom is unseen and quickly vanishes, everybody can think that Ransom Stoddard killed Valance and so can distinguish this act of violence from a personal one by associating it with Ranse’s ideals, can believe that the rule of law and democracy triumphed. Violence before there is law is unavoidably lawless, but if it is for the sake of law the paradox can be lessened if not eliminated.’

The legend of the man who shot Liberty Valance is used to help found a community based on values of property ownership, rule by law, and so on. Returning to The Dark Knight Rises: what is the legend of Harvey Dent used for? During Commissioner Gordon’s speech to mark ‘Harvey Dent Day’ (a public holiday - for Gotham City at least) he makes reference to the ‘Harvey Dent Act’. Although the details of this piece of legislation are never clarified, what does become clear is that it has extended the powers of the police, and been instrumental in ‘cleaning up the streets’ of Gotham. That is, this particular ‘champion of law and order’ is being used to shore up not liberal democracy, but something edging towards a police state.

The film’s attitude towards this (as towards many other things) is not one hundred per cent clear. Gary Oldman’s Gordon is unfailingly dignified, and his competence and fairness make it virtually impossible to imagine him arresting an innocent person. He expresses misgivings over his actions, but these misgivings seem to relate more to the lie behind the Harvey Dent Act, rather than what the Act has achieved. An analogous problem underpins another moment in the film, when Bruce attempts to justify his holding of extra-legal supergadgets and his withholding of them from others by declaring that ‘one man’s tool is another man’s weapon’. In both cases, the characters seem to believe that it is OK that these laws or weapons of mass destruction exist, as long as you have the right people in charge of them. Or the right country, perhaps: in this attitude to jurisdiction and weaponry, we can see an echo of American exceptionalism. It is a viewpoint that the film does not distance itself from, and therefore might be taken to tacitly endorse. 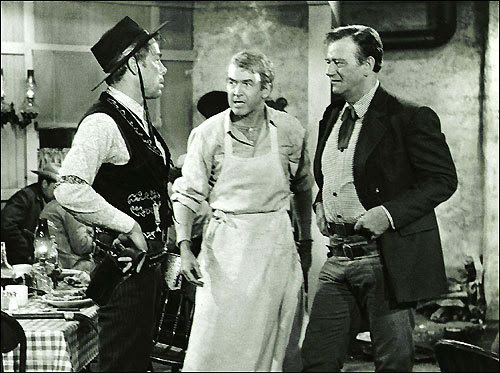 Posted by Michael Benton at 6:35 AM